Yes I'm supposed to be studying but I just had to note these things down:

- reading Hard Times by Charles Dickens and North and South by Elizabeth Gaskell for my English A Level with Ms. Acton, was more influential for my career decisions and my views of education than I will ever understand.

- when I go to sleep, when I set foot in my room, shut the door and lay in bed...the baby downstairs WILL start crying.  This was proven the other night, with my housemate as a witness.

- I love my job.  Including "stealing" playtime from the children because they didn't clean up :-)  Today my colleague and I played volleyball, and hoopla...all in 7 minutes...and the next time they cleared the toys away, boy were they thorough!

I don't contact my brother that often but when I do I always find it very entertaining...

Today.  It wasn't so much as a "Sunday Funday" but a "Sunday none-day".  I do love Sundays yes.  But lately they have calmed down a lot.  This might be due to my choice to become a bit more involved in my church because a) a bit more focus on God never hurt anyone...in fact the contrary does and b) it gives me less time to spend money and therefore save for my American adventure.

So this morning I went to church, came home, ate lunch, and then Skyped one of my good friends in America.  That was awesome.  Really awesome.  I love to know people are doing ok despite the struggles.  Oh, I also emailed a draft "itinerary" to my cousin for her pending trip to see me.  Very exciting.  Hmm...then I rang my American friend qho is in Pescara to see what she was up to.  Nothing.  She was doing nothing.  In fact when I turned up at her house there was a theme of "nothing" amongst her housemates...two of them were watching a documentary about timpani, the orchestral percussion.

So cue a trip to eat ice cream, people watching, or rather Italian watching, and a discussion about the finer things in life.  Turns out my friend doesn't have a theme song...just one for different moods.  However I favour Henry Mancini's "Baby Elephant Walk" and have done since 2007.  It's easy to hum, or bumble, or bash out on the piano.  It's an uplifting number that slips easily into any activity and if you slow it down it can actually be quite melancholy, plus it can be repeated over, and over, and over...moving on...we did eat sushi, and dumplings, and fried things, and well...I ate a lot.  Unusual.

The disaster came when I returned home to discover I had lost my gloves.  However on checking the pockets of my coat I narrowed this statement down to "I have lost a glove.".  Luckily, thanks to my housemates suggestion, I decided to retrace my steps to find the glove.  I do love my gloves.  So when I found the glove on the pavement outside my house I couldn't Adam-and-Eve-it.  This was a momentous moment for me, my glove had returned!  My hands would once again treasure the warmth of the fleece lining and the smooth leather.  It made me a little sad to find my brother didn't share my excitement...

And that's all my news in a nutshell.  Cousin's coming to stay, Brother might come for a ski.  In the meantime I've got to practice the piano, study for my Masters, oh and teach children English.

Email ThisBlogThis!Share to TwitterShare to FacebookShare to Pinterest
Labels: America, family, ice-cream, out and about, Sunday

Many people around me at the moment are in a period of change. Things of the past are no longer functioning efficiently, for whatever reason, and so now friends, colleagues, people, are faced with decisions, big decisions.

I believe that we are all broken, and that only through faith, we are able to live completely, the idea of "enlightenment" if you like, living in a peace - a stillness - which (as a Christian) reflects God's love onto ourselves and others.  However, it is not until we accept our own brokenness that we are able to reach this stillness, this peace.  Somedays I think I've reached it, but normally not.  So I was surprised when my Masters study today touched on this idea whilst discussing 'Human Agency'...

I was asked to think of a situation in which I had been able 'act on the world purposefully'.  Then, in the commentary that followed this task, the Guide drew out a discussion that referred to the idea that there were others involved in this situation, like "enablers", who assisted you in that situation.

You can probably think of many instances where a quick word with someone whom you thought would know something helpful has enabled you to move forward. The key to such agentive experiences is connecting with what you do not know, knowing who does know and being proactive. It follows from this that a person can be prevented from acting or feeling able to act because of a lack of know-how or of knowing whom to connect with to get that know-how.

However, what struck me more than the idea of needing to reach out to others when you face something new, or when you are trying to move forward is that 'Understanding and having ownership of your goals are a key to knowing how to act and feeling able to act.' (The Open University, 2013, p. 27).

Goals, i.e. to "fix" - correct or improve - something that is "broken" in our lives (lose weight, think positively etc), affect our everyday actions.  Goals can be achieved but they can also be changed, adapted, modified, erased completely or joined with someone else's on the route to achievement.  But, if you have no goals in the first place, what the hell do you do when you have to make a decision?  Time needs to be invested in securing the "ownership" of your goals, so that when a fork in the road appears in front of you, you can own the decision, and be able to live with the consequences, even if the chosen path turns out to lead you somewhere completely unexpected...but more importantly take the decision and the consequences as an opportunity for learning.

And that, folks, is my view of the "meaning of life" for today.  I'm pretty certain it will be different tomorrow!

When the housemate's away...

So the housemate went to Naples and I...

...threw an amazing party?  No.
...burnt not only the house, but the apartment block down?  Nah.
...charged around like a "bull in a china shop" and broke everything?  Nope.
...changed the locks?  Hell no.
...didn't wash for the whole weekend and only wore my pyjamas?...this was tempting, but no.

Nope, I cooked up a storm in the kitchen.  Yes.  Three weeks of interchangeable meals all set and freezered for my lunches ahead!  Go ME!

An article on Borracce di poesia has been written for the World Cycling Atlas, quite an important little article this one:

And yes it's in English, so yes, they are my translations of the awesome poems, in collaboration with Mr. Ricci of course ;-)

To continue on the bicycle theme I have been thinking a lot about the name of my new wheels.  As I stated I hope that I do not offend anyone in the following blog but I have made my decision.  There was a lot of deliberation and careful reflection involved, and discussions with many friends and family as to me this process is important.  Goodness knows what I'd be like if I ever have to choose the name of a real human being, I think I'd stick to Pickle ;-)

There were many suggestions so thank you to all of those who provided them.  In no particular order they were:

Legnano
Mercedes Pakes
Lancia Pakes
Audrey
Blu Scuro
Freccia Azzurra
Freccia
Bikey
Sofia
(and there was one from my colleague but I cannot remember it so it can't have been suitable, sorry!)

As it happens I've chosen to combine two of the suggestions above as I feel that they add to the nature of my work and my aspirations to  and that the bike is in fact, blue.  So, without further ado, I hereby announce that the name of my new, secondhand bicycle is....drumroll....

I am calling for your help.

Recently my bicycle and I (Azzurra) have been falling apart, rather than together.  Thanks to the new location for work and the fact she has to provide me with 40 minutes of cycling each work day, Azzurra decided she no longer wanted to maintain our relationship.

Thursday morning Azzurra began whirring, quietly at first, but by the evening she was not happy and the last 10 minutes of my ride home resembled a Spinning class.  My god, that bike packed some resistance!  Friday morning I stride on down to Il Biciclettaio and it gets fixed, the back wheel was rubbing against the frame, hence the resistance.  Thankfully I'd arranged a lift to work and back so bumbled off without any thought that there would be any more problems.  However, returning that evening from the ice-cream meeting with my friends, Azzurra's back wheel started wobbling precariously.  It was in such a manner that I refused to ride it but pushed it home from the station.  Honestly, at that point my world began crumbling down around my ears...what would I do without Azzurra?

Saturday was a busy day: meetings here, there and everywhere and all relating to work but there was the constant black cloud of Azzurra following me around.  In the late afternoon I finally had time to get her sorted.  Although strapped for cash - this is the first month I am officially "saving" for the big trip to America next year - I decide I have to sort out my bike so I ask Il Biciclettaio to quote me how much it would be to get Azzurra back to some sort of normality.  He looked at the back wheel and exclaimed it was ready to fall off...yeh...I'd figured that one out.  Anyway he said that the wheel would be €36 to replace and he knew that the brakes and the gears were buggered too....

Then I asked if he had a bike that I could buy now, and...yep.  He did: €80.  And this is where it was a little bit freaky.  I had to have a think.  I love Azzurra.  She has done well to serve me for over a year now and sometimes it's hard to part with things you've loved so I went outside to ring a friend to run the options past her.  Instead I saw a different friend literally standing on the pavement next to me...random!  I excitedly dragged her over to explain the situation and of course it was decided that the "new" bike was the best option, especially when Il Biciclettaio said he'd put on a basket...A BASKET!

At that news I declared the relationship between Azzurra and myself officially over, gave her a gentle kick and moved on.  Now, what the hell do I name this bike?! 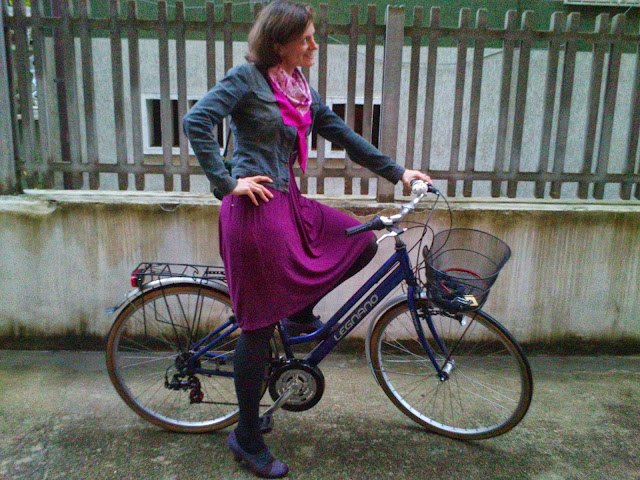 I was all set to do the Morris Dancers post...but alas the video would not upload so you've got skittles instead.

I love this game.  I'm not entirely certain how "English" it is in general but to me it's English because we play this pretty much every Cricket Tour due to an actual game of cricket being rained off.  Like when I go bowling, sometimes I'm good and sometimes I'm not this is not me bowling, rather it is me taking the video...you get the jist though!