...working in my fight against mosquitoes.

I went to a party the other night.  It was a particularly good party as the main ingredients for a party, except jelly, was there: friends, dancing, social hilarity, ice-cream (but no jelly as stated even though I have some Rowntrees jelly in my cupboard, doh!), a ruddy good cheesecake and grissinini, my new favourite party snack (and yes Italian speaking people I know the name is grissini but these were really thin breadsticks!) and everything a good party entails.  It was for two very good friends of mine and it was a party with a three-fold meaning: a 'moving out' party, a 'it was my birthday yesterday' party, and a 'it's my birthday in 2 days' party...a very clever ploy indeed.  Never mind killing two birds with one stone, but three!

Moving on swiftly...at this party another friend of mine was bitten by mosquitoes pretty badly.  In fact so badly one could've mistaken the bites as being from a vampire mosquito, or of a jungle boy's dart shooter, or something similar found only in the Amazon...I then proceeded to babble on about garlic, poor friend.

At least five times a week, with my breakfast, I've eaten a clove of garlic chopped up like I explained here.  Currently I have three mosquito bites, two of which are from two weeks ago (I scratched them pretty badly *tut* *tut*) and one from last night.  This is a very different story to what was occurring to me last year when my legs were constantly covered in bites.  The fact that I did not get bitten by the vampire mosquito/jungle dart at the party suggests that I'm doing something right and as the garlic is really the only thing I've changed I'm not going to stop dicing and swallowing a clove every morning now.

And of course, as my housemate said, garlic can also act as a "man repellent" therefore eating garlic every morning is two-fold: it's beating the mosquitoes and helping me with my 'no dating til 22nd December 2013' promise at the same time!  Hooray for 'multi-fold' events like parties and garlic.
Posted by Unknown at 12:16 No comments:

I answered the phone at work today!  It's only taken a year and a half but I finally did it and I am proud of myself.

I have a small fear of answering the phone.  It's not that big of a fear, hence using the word 'small', but at my second Saturday job, at the ripe old age of 16, I used to refuse to answer the phone.  Literally walking away from it.  Then the other staff members cottoned on after about 6 months and would coax me into it.

Anyway.  Today I answered the phone at work and I managed to say all of:

The mosquitoes are back in town people and so far I've got six bites on my left leg and three on my right.

This year I AM NOT going to scratch them...nope.  I have an electrocuting device that my friends gave me for Christmas.  You literally electrocute the bite a few times as 'pain relief'.   Oh and for a deterrent I am going to eat a clove of garlic everyday...anything is worth a try!

Now garlic wise, I've eaten a whole clove before and it wasn't pleasant.  However I've been advised that if you shell the clove, cut it lengthways, take out the middle bit, cut the halves length ways again and dice it into really small pieces you can then make it into a "tablet" to swallow in one go and therefore avoid the garlic odour that I know so well.  N.B. I advise everyone against making garlic soup unless you live on your own in the middle of nowhere.

I'm going to beat the little bitey critters, oh yes I am, even if I have to resort to my stealthy karate/self defence moves! 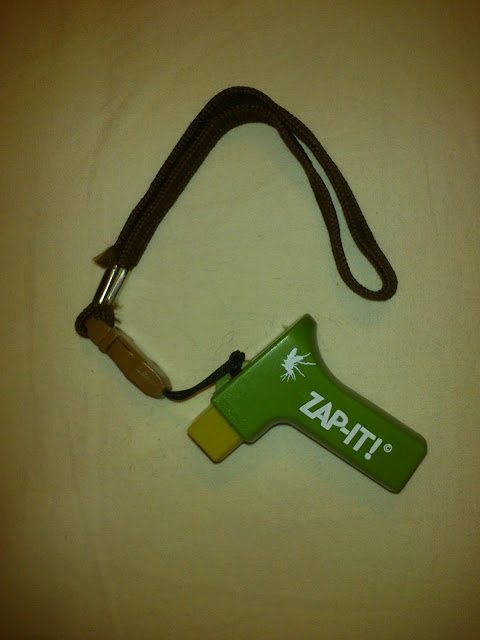